Jesus is coming again. It's in the Bible, John 14:2-3, NKJV. “In My Father’s house are many mansions; if it were not so, I would have told you. I go to prepare a place for you. And if I go and prepare a place for you, I will come again and receive you to Myself; that where I am, there you may be also.”
>> Get your free Bible prophecy guide: Signs of Jesus' second coming

For you yourselves know very well that the day of the Lord will come like a thief at night. When people are saying, “Peace and security,” then sudden disaster comes upon them, like labor pains upon a pregnant woman, and they will not escape. (1 Thess 5:2-3).

There are signs of Jesus’ second coming. It's in the Bible, Luke 21:29-31, NKJV. “Then He spoke to them a parable: ‘Look at the fig tree, and all the trees. When they are already budding, you see and know for yourselves that summer is now near. So you also, when you see these things happening, know that the kingdom of God is near.’”

What are some signs? It's in the Bible, Matthew 24:3, NKJV. “As Jesus was sitting on the Mount of Olives, the disciples came to him privately. ‘Tell us,’ they said, ‘when will this happen, and what will be the sign of your coming and of the end of the age?’”

Browse additional resources:
Are we living in the last days?
When is Jesus' coming back?
Where is heaven and what is it like?

Men posing as Jesus will try to deceive people in the last days. It's in the Bible, Matthew 24:23-24, NIV. “At that time if anyone says to you, ‘Look, here is the Christ!’ or ‘There He is!’ do not believe it. For false Christ's and false prophets will appear and perform great signs and miracles to deceive even the elect—if that were possible.” 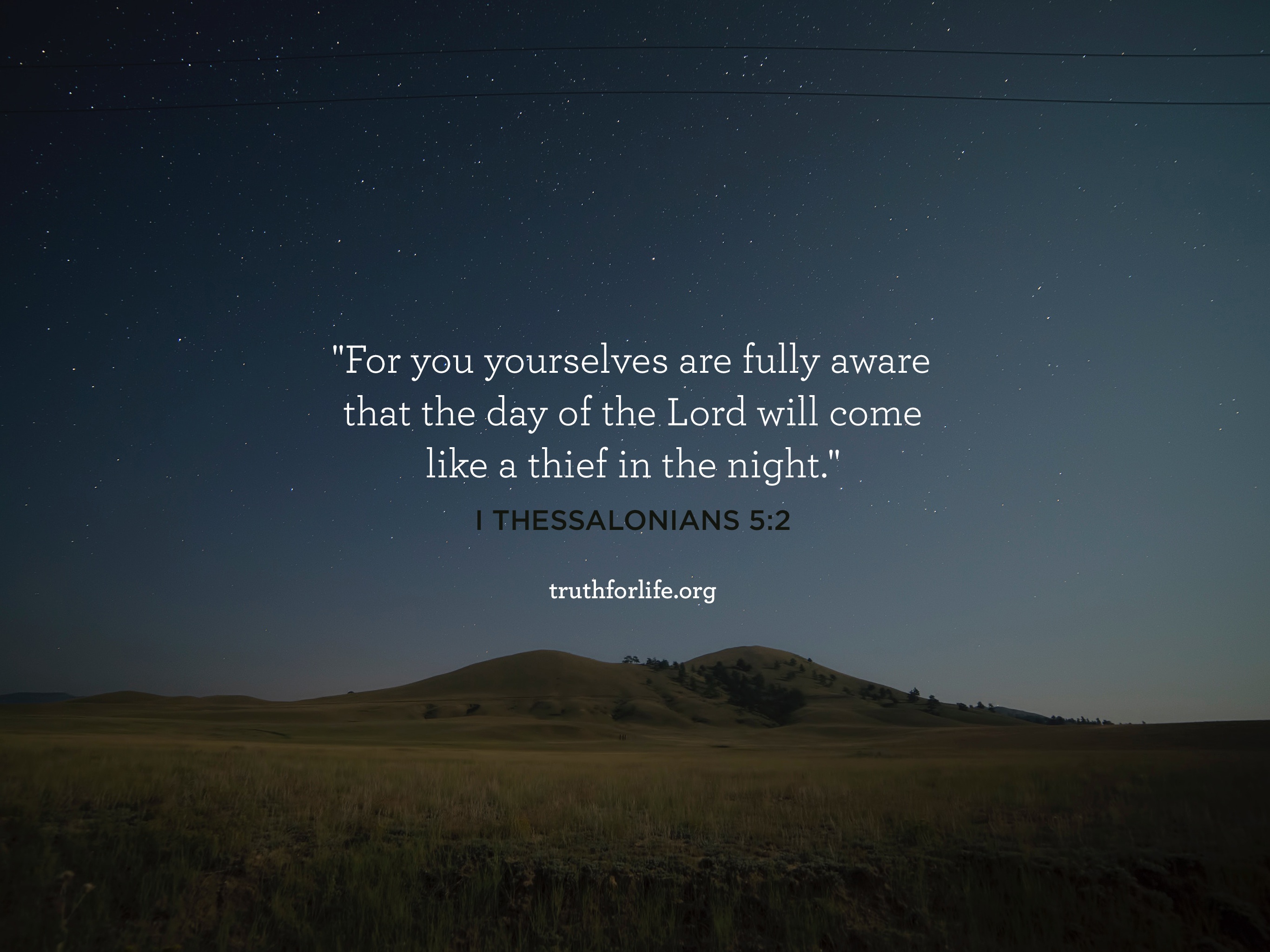 There will be wars, though they may seem overwhelming, it is not the end. It's in the Bible, Matthew 24:6, NKJV. “You will hear of wars and rumors of wars, but see to it that you are not alarmed. Such things must happen, but the end is still to come.”

Earthquakes and famines, and all the signs are only the contractions of what's coming. It's in the Bible, Matthew 24:7-8, NKJV. “There will be famines and earthquakes in various places. All these are the beginning of birth pains.”

Are we living in the last days?

Non-Christians will find it hard to believe we are living in the last days of earth's history. It's in the Bible, II Peter 3:3-4, TLB. “First, I want to remind you that in the last days there will come scoffers who will do every wrong they can think of, and laugh at the truth. This will be their line of argument: ‘So Jesus promised to come back, did He? Then where is He? He'll never come! Why, as far back as anyone can remember everything has remained exactly as it was since the first day of creation.’”

What moral conditions will be characteristic of society in the last days? It's in the Bible, II Timothy 3:1-5, NIV. “But mark this: There will be terrible times in the last days. People will be lovers of themselves, lovers of money, boastful, proud, abusive, disobedient to their parents, ungrateful, unholy, without love, unforgiving, slanderous, without self-control, brutal, not lovers of the good, treacherous, rash, conceited, lovers of pleasure rather than lovers of God—having a form of godliness but denying its power. Have nothing to do with them.”

What other signs of the last days does the Bible mention? It's in the Bible, Luke 21:25-26, NIV. “There will be signs in the sun, moon, and stars. On the earth, nations will be in anguish and perplexity at the roaring and tossing of the sea. Men will faint from terror, apprehensive of what is coming on the world, for the heavenly bodies will be shaken.”

Talk of peace and safety are a sign of the last days. It's in the Bible, I Thessalonians 5:2-3, NIV. “For you know very well that the day of the Lord will come like a thief in the night. While people are saying, ‘Peace and safety,' destruction will come on them suddenly, as labor pains on a pregnant woman, and they will not escape.”

What are people to do when they see these things taking place? It's in the Bible, Matthew 24:42-44, TLB. “So be prepared, for you don't know what day your Lord is coming. Just as a man can prevent trouble from thieves by keeping watch for them, so you can avoid trouble by always being ready for My unannounced return.”

It's in the Bible, Luke 21: 28, NKJV. “Now when these things begin to happen, look up and lift up your heads, because your redemption draws near.”

Question: 'What does it mean that Jesus will return like a thief in the night?'
Answer:

God Will Come Like A Thief In The Night

The return of Jesus Christ is likened to the coming of a thief in the night. Two passages use the wording “a thief in the night”: Matthew 24:43, “Understand this: If the owner of the house had known at what time of night the thief was coming, he would have kept watch and would not have let his house be broken into,” and 1 Thessalonians 5:2, “You know very well that the day of the Lord will come like a thief in the night.”
In Matthew 24, Jesus speaks of His second coming at the end of the tribulation. Paul calls it “the day of the Lord” in 1 Thessalonians 5. This is a day of divine retribution featuring astronomical upheaval and the visible “sign of the Son of Man” in the heavens (Matthew 24:29–30). Jesus says it will happen “after the tribulation of those days” (verse 29, ESV), a description that distinguishes this event from the rapture, which happens before the tribulation.

How is the second coming going to be like a thief in the night? The key element of Jesus’ comparison is that no one will know when He will return. Just as a thief catches a household by surprise, Jesus will catch the unbelieving world by surprise when He returns in judgment. People will be “eating and drinking, marrying and giving in marriage” (verse 38), just as if they have all the time in the world. But then, before they know it, Judgment Day will be upon them (verses 40–41). Paul puts it this way: “While people are saying, ‘Peace and safety,’ destruction will come on them suddenly, as labor pains on a pregnant woman, and they will not escape” (1 Thessalonians 5:3).
The believer does not fear this swift and sudden judgment; the “thief in the night” will not catch us by surprise. Christians are in a separate category: “But you, brothers and sisters, are not in darkness so that this day should surprise you like a thief” (1 Thessalonians 5:4). It is only those in darkness who will be taken unawares, and we “are all children of the light and children of the day. We do not belong to the night or to the darkness” (verse 5). Praise the Lord, “God did not appoint us to suffer wrath but to receive salvation through our Lord Jesus Christ” (verse 9).
The unsaved should heed Jesus’ warning: “Be ready, because the Son of Man will come at an hour when you do not expect him” (Matthew 24:44). How can you be ready? God has provided the way for you to escape the judgment. That way is Jesus Christ (John 14:6). By accepting Jesus as your Lord and Savior, you are granted forgiveness of sins, mercy, and salvation with the promise of everlasting life (John 3:16; Ephesians 2:8–9). The “thief” is coming, but you can be a child of the day. Don’t put it off; this is “the year of the Lord’s favor” (Luke 4:19).
Office 365 Dsd
Destiny 2 Desperado Perk
Comments are closed.