In: FASHION FILESHOW TO'S: BEAUTY AND FASHION TIPS
Recently, I have encountered someone who thinks that MADE IN CHINA Le Pliages are not the real thing.

I have 8 Longchamp Le Pliages, and they all have 3- fold care cards with the same stuff written in everything. So I conclude that yes, a Le Pliage's Care Card MUST be accurate with other Le Pliages. I do not claim myself as an authority in authenticating Le Pliages. I have heard that Longchamp has outsourced the production of their purses and that is why some have the tags and some do not. Some of the tags are leather with the Longchamp seal and the serial number on the reverse side, others are a heavy, clear plastic with the information written on that.

– Le Pliage Longchamp bags should indicate that it was either MADE IN FRANCE, MADE IN TUNISIA, or MADE IN CHINA. – White Translucent tag with the correct manufacturing locations and style number. Style Numbers are comprised of a 4-Digit Model Number, followed by 089 (The code for the Le Pliage line), followed by a 3-Digit Color Code. This eye-catching leather top handle bag (59,000 yen) features Pikachu adorably hiding behind the Longchamp “L” and is limited to 500 bags world-wide, each with a unique serial number. Le Pliage® Cuir Pokemon. This line of leather bags comes in three colors.

Contrary to popular belief, not all 'CHINA- MADE' stuff are fake. A lot of design houses and big brands are already manufacturing some of their products in China. We all know that labor in Western countries is expensive, so a lot of brands had tapped the Chinese community for fast and cheap production. And Longchamp is one of these brands.
Long before Longchamp became a must- have for every woman in all ages, The LCs we see are only MADE IN FRANCE. Perhaps, in order to sustain the worldwide demand, Longchamp had already licensed a production factory in China. So the Longchamps nowadays are either MADE IN FRANCE or MADE IN CHINA.
In this entry, I am comparing FRENCH and CHINESE Le Pliages in order to remove any shadow of doubt regarding the authenticity of China- made Le Pliages. This will also serve as a helpful entry to determine whether your Le Pliage is authentic or a knock- off.

These are two of my Le Pliages. The one on the left is Large Long Handle in Navy (Made in France), and the other is a Medium Short Handle in Black (Made in China).
Actually, the only striking difference between the two is the material of the bag. The bag material of the French- made Le Pliage is thicker, heavier, and matte in finish, while the Chinese- made is lighter, thinner, and glossy in finish. Apart from these two striking differences, there are no known inconsistencies between the French- made and Chinese- made Le Pliages (unless what you have and bought is fake).
What's the reason behind this? Methinks that this phenomenon is caused by workmanship. French laborers work differently than the Chinese. Also, the material they have available also varies. Perhaps each country (since they're licensed by Longchamp) are already producing their own raw materials to create a Le Pliage, hence the differences in the bag material. No need to worry, because the fact that MADE IN CHINA Le Pliages are being sold in Longchamp boutiques in France is a telltale sign that these Le Pliages are the real thing.
Now here are more comprehensive descriptions and detailed observations on authentic Longchamp Le Pliages.
The Medium Le Pliage is MADE IN CHINA.
Le Pliage handles are made of cowhide leather (the leather used to manufacture LV bags).
The leather on the handles should be soft, smooth, and flexible. Not stiff and rough. Cowhide leather colors vary, as well as the markings on the leather. Genuine cowhide leather comes from genuine cows. Inasmuch as no two cows are the same, so no two leathers are alike. :)
Here is a comparison pic of the flaps. The jockey graphic on the Large Le Pliage is bigger than the jockey on the Medium Le Pliage. The size of the jockey depends on the size of the bag.
Button closures of Le Pliages are gold- plated. The exterior part of the button should bear the jockey on the middle part. And the round closure on the inner part of the flap should bear the word 'ORIGINAL PRYM' around it.
Also, the furry interior of the flap should feel very smooth to touch. Le Pliages are expertly and carefully handcrafted, so authentic Le Pliages don't have loose hair sticking out of the stitching on the tip of the flap.
Zipper pulls of Le Pliages come in two colors: GOLD and PEWTER. The round- shape is thin, and should not seem too big enough for the jockey logo.
The zippers are made by YKK. This is one of the unmistakable signs that your Le Pliage is authentic.
On the back part of the flap, the words 'MODELE DEPOSE' are engraved on the leather. This indicates the style of the bag. Another telltale sign that your bag is authentic, is that it should bear the accent on the letter E. So if you count the Es on 'Modele Depose', you should find 3 accents (The last E on the word 'Modele' does not have an accent).
Recently, the phrase was engraved in between the stitches of the back flap. Before, it was placed right below the LONGCHAMP word. This is a new characteristic of today's Le Pliages.
Bear in mind that the phrases embossed on the middle part of the stitches may vary, depending on what country a Le Pliage is from. It may say 'Modele Depose', 'Modele Depose 'Shopping', or 'Shopping Type _'. Also, the indicated style should agree with the actual style. This applies to all Le Pliages. This is a helpful one taken from ebay:
Sac a dos - backpack
Type L - large tote, short handles
Type M - medium-large tote, short handles
Type S - small tote
'shopping' - large tote, long handles; medium tote long handles
cabas - rectangular, no zipper
The handle bases should bear cream- colored stitches that look almost rope- ish. And the stitch markings of the handles are visible on the interior part of the bag. Authentic Le Pliages have 'V' shaped stitch markings. The fake ones have bigger and 'U' shaped stitch markings.
Lastly, the inner pocket should be sewn right below the zipper lining. Fake Le Pliage inner pockets are sewn half an inch below the zipper lining. The stitches on the tips of the pocket are also joined with the running stitches of the zipper lining for it to become sturdier.
Here are some of my Le Pliages. The Navy, Steel (Limited Edition), and Old Rose LPs are Made in France, while the Black, and Thistle LPs are Made in China.

For better comparison, I shall purchase a fake Le Pliage. I will also compare the Le Pliage deemed as fake by the person I recently encountered, with the fake LP and an LP from my personal collection.
I HOPE THIS ENTRY HELPED YOU IN AUTHENTICATING YOUR LONGCHAMP! :) FEEL FREE TO ADD ANY INFORMATION ON HOW TO AUTHENTICATE LONGCHAMP LE PLIAGES. 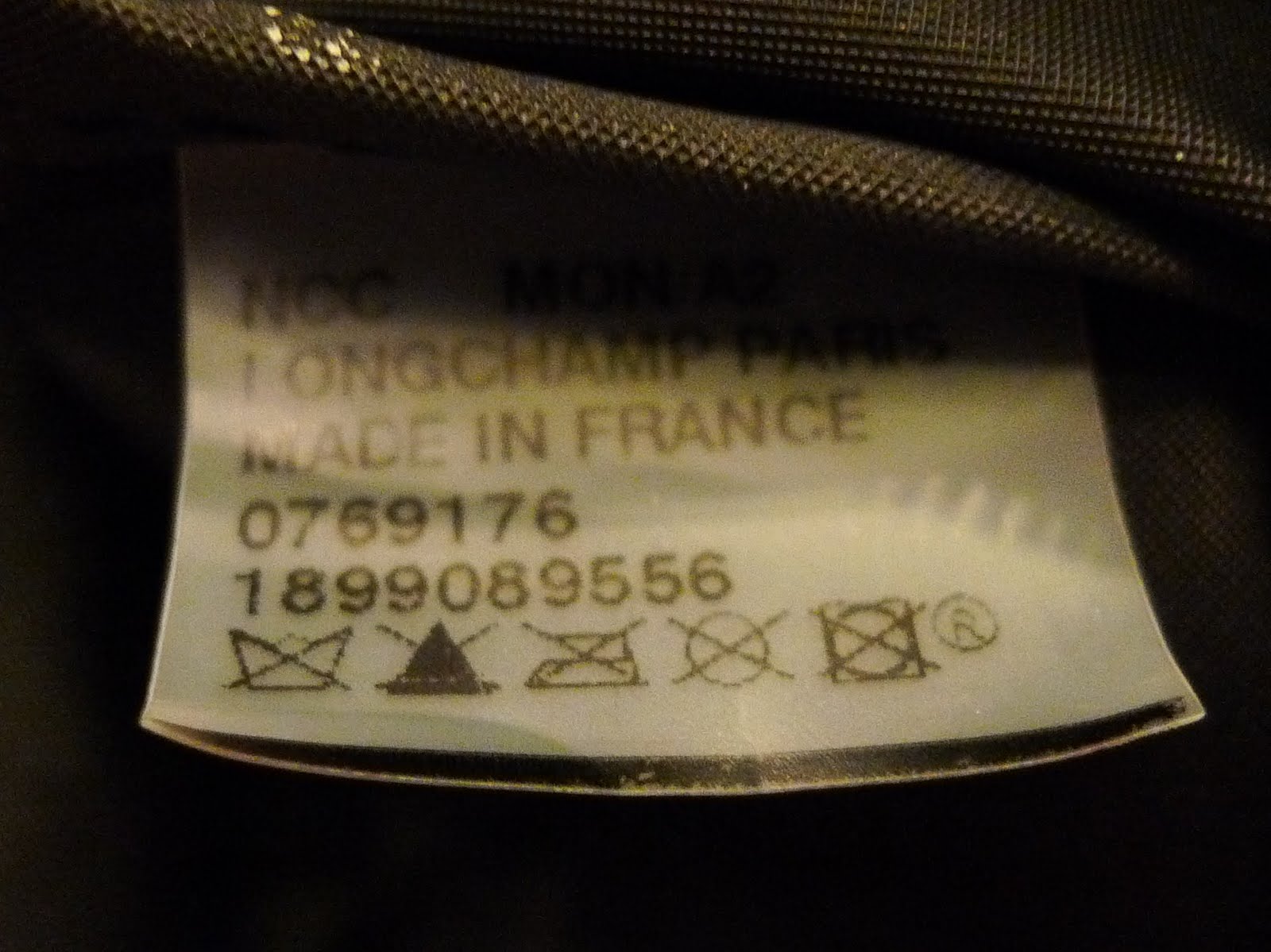 A serial number is a unique, identifying number or group of numbers and letters assigned to an individual piece of hardware or software. Other things have serial numbers as well, though, including banknotes and other similar documents.

The idea behind serial numbers is to identify a specific item, much like how a fingerprint identifies a specific person. Instead of some names or numbers that specify a whole range of products, a serial number is intended to provide a unique number to one device at a time.

The term serial number is often shortened to just S/N or SN, especially when the word precedes an actual serial number on something. Serial numbers are also sometimes, but not often, referred to as serial codes. 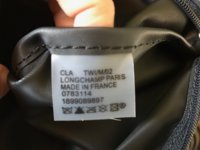 For example, a model number for a router might be EA2700 but that's true for every single Linksys EA2700 router; the model numbers are identical while each of their serial numbers is unique to each particular component.

As an example, if Linksys sold 100 EA2700 routers in one day from their website, every one of those devices would have 'EA2700' somewhere on them and they would look identical to the naked eye. However, each device, when first built, had serial numbers printed on most of the components that are not the same as the others bought that day (or any day).

The ISSN used for magazines and ISBN for books is different as well because they're used for whole issues or periodicals and aren't unique for every instance of the copy.

You've probably seen serial numbers many times before. Nearly every piece of the computer has a serial number including your monitor, keyboard, mouse and sometimes even your entire computer system as a whole. Internal computer components like hard drives, optical drives, and motherboards also feature serial numbers.

For example, if a piece of hardware is recalled for some reason, customers are usually made aware of which particular devices need service by being provided a range of serial numbers.

Serial numbers are also used in non-tech environments like when keeping an inventory of tools borrowed in a lab or shop floor. It's easy to identify which devices need to be returned or which ones have been misplaced because each of them can be identified by their unique serial number.

Serial numbers for software programs are usually used to help ensure that the program's installation is only performed one time and only on the purchaser's computer. Once the serial number is used and registered with the manufacturer, any future attempt to use that same serial number can raise a red flag since no two serial numbers (from the same software) are alike.

If you're planning on reinstalling a software program you've purchased, you'll sometimes need the serial number to do so. See our guide on how to find a serial key if you need to reinstall some software.

Sometimes, you might find that a software program can attempt to make a serial number for you that you can use to activate a program illegally (since the code wasn't legally purchased). These programs are called keygens (key generators) and should be avoided.

A serial number for a piece of software is not usually the same as a product key but they are sometimes used interchangeably.