Traveling in a bus, gazing at all the lush green trees and bushes dotting the roads, is fun. More so if you get a seat by the window! Isn’t it? Well, director Rathibala’s upcoming film Madurai to Theni (Vazhi: Andippatti) is fun not less than traveling in a bus seated comfortably in a window seat.
The very thought of a film with a connection with Madurai brings to our minds gory stunts, belligerent people, and trouble galore. But Madurai to Theni is something completely away from that league; the film portrays a beautiful love story of a young couple with no gory violence.
Based on a true incident, the film shows what happens to a young couple who travel from Madurai to Theni in a bus. In fact, this love story is extensively filmed in a bus and villages that are en route the Theni-Madurai stretch.
In the recent press meet, director Rathibala announced that the film is very much realistic, something which today’s cinemagoer prefers and sounded confident about the film’s victory. He further added that the film will be counted along Vennila Kabaddi Kuzhu, Paruthiveeran and the likes.
Small-screen-artist-turned-film-hero Arvind Vinoth, who played the lead in Balam, is the film’s hero and beautiful Srithika (of Vennila Kabaddi Kuzhu) fame is the heroine. Singamuthu, Muthukalai, Nellai Shiva, “Subramaniapuram” Rasathi and many other seasoned artists form the suppoting cast.
Crew: Director and screenwriter – Rathibala; producer – K. Vimal and S. Janakisonaimuthu; dialogues – Surlipatti Sivaji; music – Sevi. 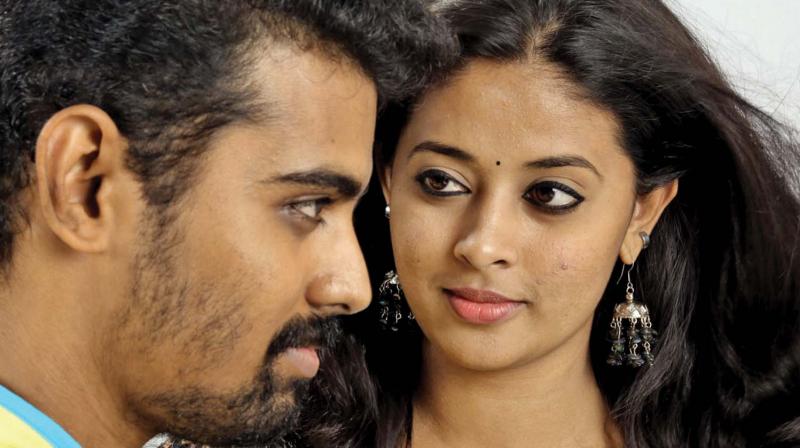 Tamil cinema is now turning its attention towards new themes and new avenues. Welcome debutant filmmaker Radhibala, who has managed to weave an interesting movie that is typical of Madurai, the flavour of Tamil cinema.

What more, the director deserves applause for narrating a romantic tale on board a bus that is proceeding from ‘Madurai To Theni’ - via Andipatti, as the title suggests.

Radhibala deserves all applause for his hard work to get even the minute detail perfect in the script. Be it the dialogue, body language or the environ, everything is oozing with Madurai flavour.

At a time when every other filmmaker have picturised the town as a violent and furious, Radhibala has shown the pleasant side of it. There is no glamour, violence or double-entendre in the movie.

The intelligent director has not given any name to the lead characters enacted by Vinodhkumar and Srithika, who travel in the bus. Sweet romance between them amidst all fun in the travel is the film.

A youth (Vinodhkumar) decides to go to a village near Theni from Madurai to take up the job of a primary school teacher. Just before he begins his journey in a bus, he helps rescue a young girl (Srithika) from a freak mishap. Call it coincidence, both travel in the same bus.

The couple doesn't speak to each other but develops soft corner towards each other. Also there is the bus conductor (Raj Kumar), who hogs all limelight with his antics. When the girl gets down in her village, the youth follows her.

He manages to locate her house in the village and openly express his desire to marry her to her parents. All hell breaks loose. Did he manage to convince them and take the girl with him or not forms the climax.

What is interesting is that the director has managed to render an engrossing entertainer without any popular artiste in the film. Newcomers Vinodhkumar and Srithika have done a commendable work. They look at ease before the camera and performed what their director wanted them to do.

Singamuthu, who plays a prominent character, does a neat job and so are Nellai Siva and Muthukalai, who appear briefly in comic roles.

The movie shot in digital format by Guhan is pleasant to eyes. Music by Xavi is racy especially the remix of 'Dheena Karunakarnae..'. All said, the film is a feel-good entertainer that is worth a watch.