THE ROMAN EMPIRE 270 BC ARRETIUM, ETRUTIA War with the Etruscans and Samnites had delivered Etrutia and Umbria into the hands of the Julli family. To the south, the Brutii family had driven the Greeks out of Croton. » Strategy » Rome: Total War. Not being rude here depending on which version of Rome Total War you have the 'masses' used to be known as plebs. But honestly I think the Julii are the best. Their first Senate Missions are very easy to complete 5. Though powerful, the Julii's main enemy, Gaul, begins the game wrought with rebellion and are too busy dealing with rebels, not to mention Britons and Germans, to invade Italy, and thus can be kept at bay with a little skillful diplomacy (offering trade rights, money in exchange for map info) to stay friendly with Gaul without having.

One of my favorite campaign factions that I felt to be a challenge to play are the Britannia faction. Whilst playing Brittania, I will be giving tips to people who prefer Brittania or general Barbarian factions. As many know, Germania and Britannia are the two most fantasy factions, Germania having overpowered and (almost) invincible Berserkers. In fact, the most credible evidence of the ‘berserkergang’ was that of Irish and Viking soldiers having the ability to go into a furor unmatched in normalcy. Britannia has Head Hurlers, which no historical evidence shows that these units were real.

Britannia start with Londinium, Eburacum, Samarobriva, and Deva. Britannia will be surrounded by hard foes like Julii Romans, Gaul, and Germania. As I played this, I prefer picking at the Gauls for good measure, seeing as Julii also dives into their murky forests and high hills. In the beginning, realize this.. Britannia like most Barbarian factions rely mostly on fierce infantry, but Britannia lacks in missile (ranged) units, slingers make good amends when you need a nice skirmish, but they are no match to long range and better powered archers. The one advantage that must be seeked is the chariots.

Britannia’s position cries for tricks and strategies amongst cavalry relying Gaul and Romans, chariots are the perfect weapon. With Britannia, I have found that the path I chose on my conquests has led me to be both harried by Julii and Gaul mostly. Equites and Noble Cavalry are the targets that I found will scare the enemy, it is especially useful as I play a defensive role in the Campaign with Britannia. Chariots are dispersed throughout my territories as I instill a strategy most useful. Seeing as chariots scare infantry, it is useful when defending a sieged town or village, to rally my chariots outside the city before they get enough time to make siege equipment and run through cavalry, thus reducing the attack force and cutting down the prime soldiers to help a siege in it’s grittiest hour. Chariots have superb movement and commence in slicing the fragile underbelly and sturdy legs of horses to bring down any cavalry, which spreads fear amongst the infantry, causing them to flee the battle.

Enough with the secret telling, I will be updating this page as I move along my campaign as Britannia, loaded with screenshots and quite possibly video footage if I can find a suitable program.

The Julii are one of the three playable factions in Rome: Total War that are playable from the beginning (the other two being the other Roman Houses, the Brutii and Scipii).

Being one of the three Roman families, the House of the Julii will receive missions from the Senate, and will be forced to deal with the consequences of not completing them.

At a certain point during the game, the Senate will demand that your faction leader commit suicide. If you accept their demand, the heir will become the faction leader and the process will be renewed several years later. If you refuse, you will initiate the Civil War, a gameplay mechanic unique to the Roman factions. It should be noted that, once your popularity with the people is high enough, you can simply initiate the Civil War by attacking another Roman faction. Also, if you are playing as another faction the Civil War will not take place.

The Julii are originally based in northern Italy. They hold two settlements, Ariminium and Arretium (their capital city). 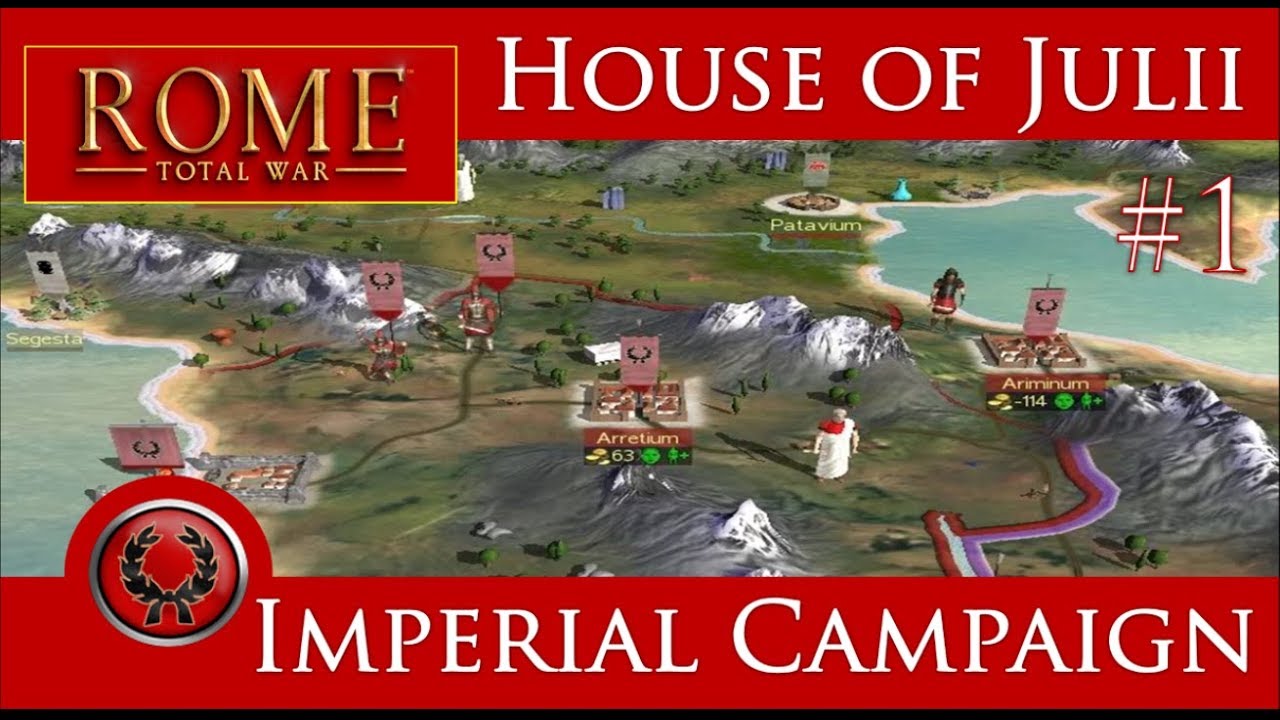 The Roman factions all have a very strong roster. Before the Marian Reforms they are an Infantry focused faction with limited cavalry and some archer and javelin support along with strong siege weapons. They have good infantry armed with big shields, Pila, which are heavy javelins, and a gladius, a short sword. They also get a strong Spear unit, the Triarii.

The Marian Reforms happen when a Roman faction controls a Huge City somewhere in Italy besides Rome. After the reforms they lose access to their old roster and get a heavily improved new roster. Any older units will not be automatically replaced, they will continue to exist, but you are not able to train any more or retrain them. After the Reforms they are still Infantry focused, but have much better support troops. Their late roster has extremely strong heavy infantry, among the best in the game, units such as Legionary Cohort, Praetorian Cohort and Urban Cohort. These men can overpower virtually any infantry opposition, and can form a tourtoise formation that makes them practically immune to arrow fire. They also have some excellent cavalry options that are only defeated by the ultra heavy Cataphract Cavalry from the East. Both their light cavalry and heavy cavalry are very strong. They get a very solid long range archer unit as well, the Archer Auxilia. Their only weaknesses are that their Spearmen, Auxilia, are not the best by a longshot and that they have limited ranged cavalry, only Cavalry Auxilia who are armed with javelins. Despite these slight drawbacks the Romans after the Marian Reforms are certainly one of the strongest rosters in the game.

In multiplayer battles the Romans can mix pre-Marian and post-Marian troops at will.

Arcani: The Arcani are a unit unique to the Julii. These units are, in effect, 'roman ninjas'. They are able to hide anywhere on the battlefield and can have a frightening effect on enemy units. They are also powerful warriors, though units of Arcani include very few soldiers, as a result. However, Arcani only have 'good morale' as opposed to the much stronger gladiator units who have 'excellent morale', and should not be used in multiplayer battles, as Arcani are not cost-effective units.

Urban cohorts: They are the strongest sword unit in the game with great defense and stamina.If you use urban cohorts for flanking actions you will win against any phalanx unit.From the front against you dont use their full potential.Urbans are so strong that when they are upgraded that they can counter almost any infantry in a head on fight.

And when attacking enemy flanks or the enemy rear, they are even more deadly! 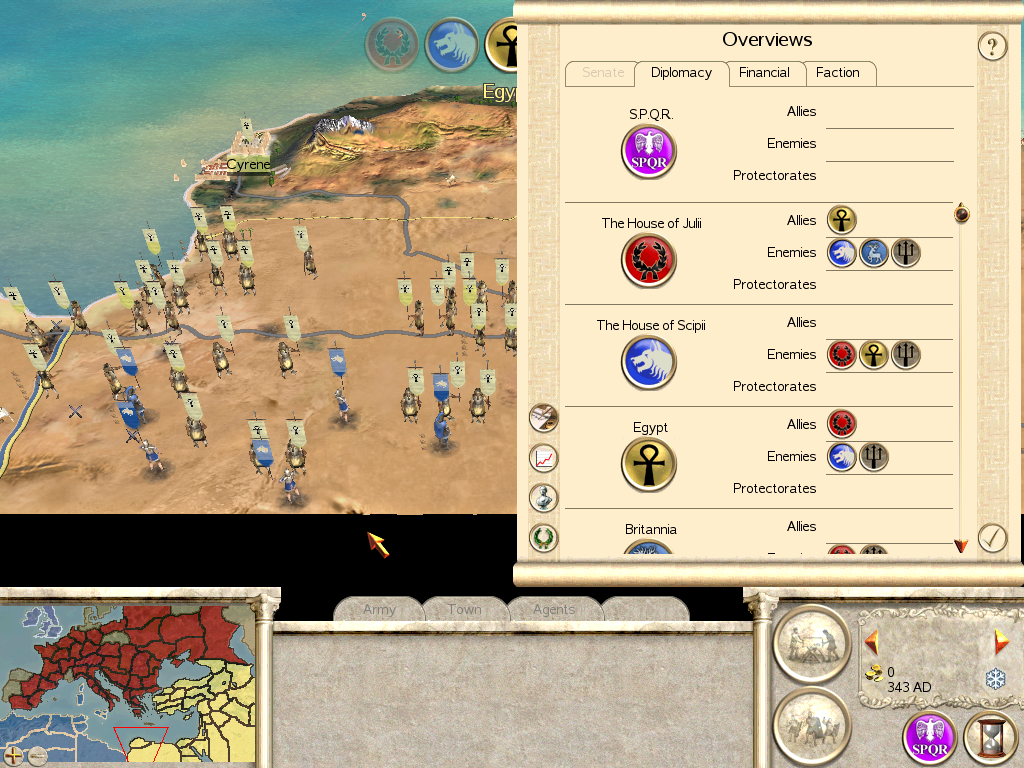 Legionary first cohorts:These cohorts bring more men to the battlefield than the other cohorts and as a result have higher firepower punch than the other cohorts.They also inspire other units to stand firm longer they have also more men this unit is ideal pila fodder in loose formation.The reason they are ideal pila fodder is because they are ordinary legionaries not urbans or preatorian cohort.However the pila is still deadly and you can kill better men with lesser men. First cohorts are notable for the fact that they carry a legionary eagle, which gives a morale bonus to any surrounding friendly units. This bonus can be valuable when fighting morale-damaging unit factions, such as the chariot factions, or germania.

Praetorian cavalry Praetorian cavalry are the best roman cavalry available. These units can take on almost any other cavalry unit in the game other than the superior cataphracts.When they have infantry cohorts in support they are almost invincible in a 1 vs 1 head on cavalry fight.

However, flanking actions kill and rout the enemy cav faster so it is advisable to not select all cav units you have, and click on 1 unit, because if your opponent holds back and flanks you, that will put you in trouble. 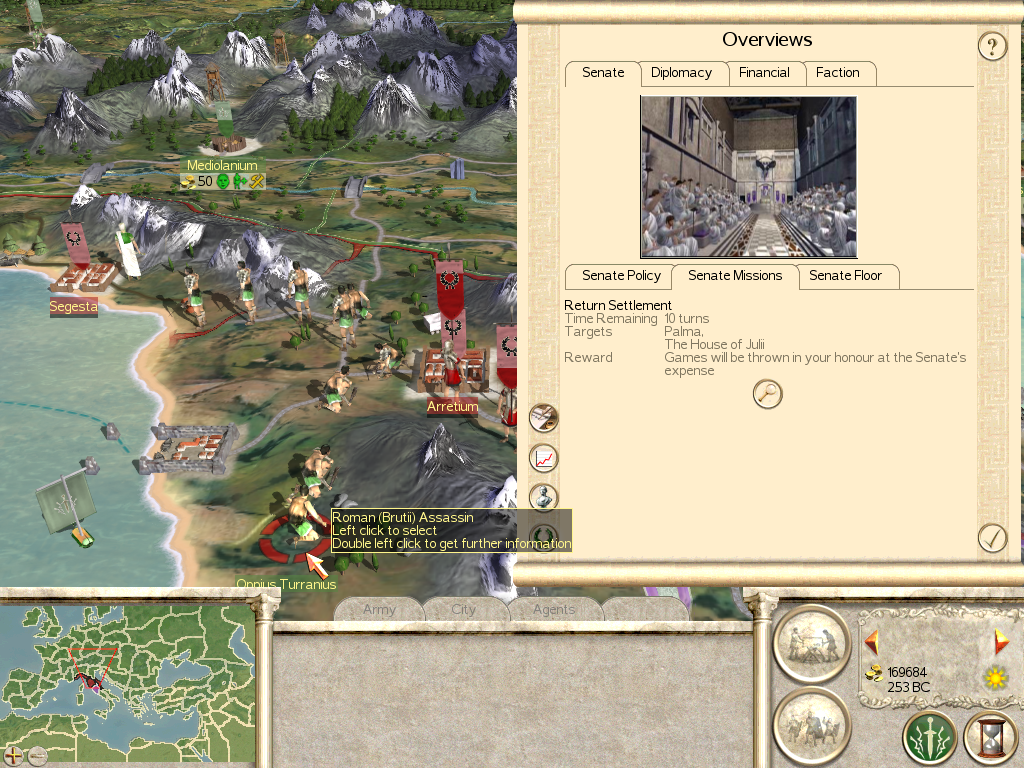 A campaign strategy guide for the House of Julii written by morble can be found here.

Have cheap garrisons 4 town watch.be aggressive with the army you have by in the beginning combine all experienced troops into 1 army and then go for Gaul!

Make sure to have a governor in every town and to develop your trade before you go to war.

Be patient and build up your economy recruit peasants from Ariminum and disband them in Arretium to speed up your development and get access to better troops.

Your early army should consist off 2 familymembers they are a lot stronger than equites and retrain themself for free!

Lots of Hastati and remember Velites can also fight well in melee if they attack the flank or you can use them as distraction.

YOU can help us improve this Wiki! ~ Look for Ways to Help and Things to Do. ~ If you need further advice, please post here.
Retrieved from 'https://wiki.twcenter.net/index.php?title=Julii_(RTW_Faction)&oldid=83039'
Let's Go Pokemon Mobile Ios Download
Notorious Movie Mp4
Comments are closed.