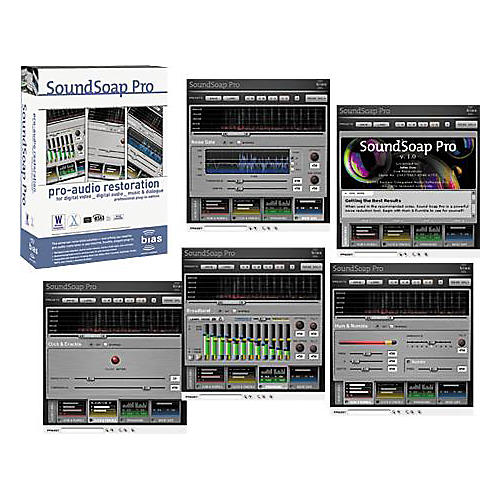 If your audio is soiled, SoundSoap 4 offers new tools to restore it to gleaming whiteness.

SoundSoap was created and marketed by BIAS, but since that company’s demise, it has now been updated and refined by its original designer, Steve Berkley, through his new company Soundness. The SoundSoap ethos was always to offer a useful degree of background noise removal while retaining ease of use, and certainly this new version is very intuitive. What’s more, it has additional capabilities, so as well as being effective against steady-state nuisances such as circuit hiss, camera whine and air-conditioning noise, it can now be used to disguise clipped audio as well as to restore volume to low-level audio recordings. Its original ‘clicks and crackle’ processing and mains hum filtering have also been retained.

SoundSoap 4 can run either stand-alone or as a 32-bit and 64-bit plug-in in Audio Unit, VST, AAX and RTAS plug-in formats, and is compatible both with Mac OS and Windows. A feature inherited from SoundSoap 3 is that media files processed on the Mac platform can be shared directly to Facebook, email, messaging, AirDrop and so on.

Through The Round Window

SoundSoap’s interface has had something of a makeover since I last used it, and in the new versions, a second window full of animated soap bubbles opens up as a space to drop your media files, which can be dragged in directly. Audio files are represented as waveforms, while video files play back their video content in the window as you tweak the audio settings.

A circular ‘Wash’ window dominates the centre of the main panel, with the Learn Noise button directly below it. This displays the pre-wash signal spectrum on the left and the post-wash signal on the right, so you get some indication of what is being removed. A slide switch turns the noise reduction on or off and also allows the noise-only signal to be monitored so you can check you’re not removing significant parts of the wanted audio. To the left is a Noise Tuner dial, which can be used to manually adjust the noise-reduction spectrum to further reduce artifacts, and below this is a Preserve Voice button that helps optimise the process when working on dialogue rather than music. When you set the de-noising using the Learn button, the Tune and amount controls are set automatically, though you can adjust them further if you want to.

De-clicking is adjusted using a simple ‘more or less’ slider, Remove Rumble activates a low-cut filter and Remove Hum attempts to remove both the fundamental frequency of any mains hum and its main harmonics, using very sharp notch filters. The only controls are an on/off switch and the option to choose 50Hz or 60Hz to tackle UK or US mains frequencies.

The large dial at the right adjusts the amount of broadband noise attenuation, and next to it is a button labelled Track. This enables a new feature I discussed with Steve back in the BIAS days. In essence, Track adjusts the amount of noise reduction being applied so that louder passages receive less processing and so exhibit fewer artifacts. This reflects the fact that less processing is usually needed during louder sections, as the wanted audio is more likely to mask the noise.

Below this are sliders for Enhance — a process to restore presence to processed audio — and Boost, the ‘added loudness’ section. Soundness describe the new Boost feature as “powerful signal processing that increases the loudness of the audio without introducing distortion”, which implies that it is more than simply normalisation — and, as you add more gain, a compressor or limiter steps in to prevent clipping when you get close to maximum level.

The way the noise reduction works is that the software ‘learns’ the noise profile from a section of the audio that contains only noise. This can be quite short, and learning only takes place while you click the Learn button on the interface. The noise spectrum is then subtracted from the audio by dividing the spectrum into a very large number of frequency bands and gating these, with the noise profile used to set the cutoff thresholds in each band.

A common side-effect of this type of noise reduction, when used to excess, or where the background noise character continually changes, is what some engineers refer to as ‘chirping’. This happens when the filters start to dig into the wanted audio, creating a watery tonality. As a rule, the more consistent the noise, the fewer the side-effects, but realistically, it’s usually better to accept that background noise can’t be completely eliminated than to inflict these artifacts on your audio by going too far.

You Hum It, I’ll Remove It

There’s a trade-off in restoration software between sophistication and ease of use, and SoundSoap tends to the latter end of the spectrum. However, as long as you don’t expect miracles, it can be very effective, provided you have a second or two of ‘noisy silence’ to work with. If you don’t have any sections of dead air to work with, you can still juggle the Tune and Reduction controls, but the results are likely to be less satisfactory. Careless or excessive use invariably leads to the chirping and warbling mentioned earlier — but then that’s true of most noise-reduction systems that work on the same principle. The Preserve Voice button really does help with dialogue work, while Enhance adds brightness after the fashion of an exciter.

SoundSoap 4’s hum removal works well against basic mains hum, but can’t really deal with buzz caused by lighting dimmers, which generate far more complex harmonics. Similarly, the de-clipping makes the sound of occasional short overloads much less offensive, but it can’t fix badly distorted audio where many consecutive samples have been clipped. De-clicking has long been a part of the SoundSoap toolkit, and is effective in reducing the audibility of vinyl clicks or digital clicks.

SoundSoap 4 has studio applications, such as cleaning up slightly noisy vocals or electric guitar parts infested with hum, but it also delivers when restoring vinyl recordings, and its ability to import video files makes it very useful in improving substandard soundtracks or those recorded at too low a level. Adding the Track feature has helped keep the processed sound clean, and Boost is a useful option, especially when working on video material, where camera metering is notoriously poor, though I would have liked some form of LED warning to let me know when I moved from simply turning up the gain to the onset of compression. Those animated bubbles can also get a bit distracting too, but that’s about it for the negatives.

There are more effective restoration products on the market, such as those made by Izotope — but they tend to be more expensive and also more complicated to use. For general use where you don’t want anything complicated and you’re only dealing with modest amounts of audio degradation, SoundSoap 4 represents an elegant and affordable solution.

SoundSoap 4 is a simple but effective restoration package that is very affordable.